Review from All About Jazz!

Here is another great review, yay! Thanks to Budd Kopman for writing it!

It is the easiest thing in the world to laud guitarist Luke Hendon's album Silk & Steel as something to be treasured by anyone who is remotely interested in the style of Django Reinhardt. It is important to note, however, that Hendon has done much more than play arpeggios as fast as humanly possible, zip the one string chromatic scale and use a tight vibrato in front of a freight train rhythm guitar —all on an large- body acoustic guitar with steel top strings and wound lower strings over silk. Yes, Django was a virtuoso, but he always put his technique in the service of his music where every note he played was full of meaning, diving deep and bringing out his gypsy background. Of course, all great musicians project their very being through their music, which is what makes listening to them such an experience. In this interview, Hendon relates how he was introduced to the music of Django by the movie Sweet And Lowdown, with the guitar playing masterfully done by Howard Aldenand Bucky Pizzarelli. Despite not being a gypsy, he has managed to get inside the entirety of Django's style, merging his own musical self with the spirit (figuratively) of Django, which emerges from the inside and not merely layered on top. Surely, the musical mannerisms of the Quintette of the Hot Club of France are all there (three hours of Django can be found here), including Hendon's outstanding playing, and that is why it sounds "authentic." The rhythm guitarists and bassist are solid, as is the violin playing (who is not trying to copy Stephane Grappelli). But there is something more going on here —most of tunes are Hendon originals (with the exception of "Softly As In A Morning Sunrise" by Romberg/Hammerstein II and Paquito by Paquito Lorier), and the added saxophone and clarinet enlarges the sonic palette. Django's music always brings a smile to the lips and transports one back 1930s France, and the best compliment here is that Hendon's music does the same, but also with a foot planted firmly in the here and now in this too short, extremely well done recording.

Track Listing: Dinner With Paulus; Nothin' But A Groove; Old Friend; Lola; Cupcake; Too Much Tequila; Softly As In A Morning Sunrise; Paquito; Joni. 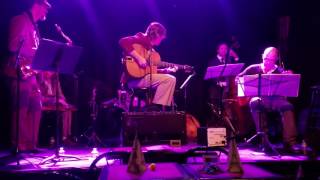